Green Man Trust, the charity arm of Wales’ largest music festival Green Man, has announced that Carmarthen-born actor and songwriter Iwan Rheon will become its Ambassador. Iwan’s role will see him involved in the Green Man Trust’s many and varied projects including arts development, training and Welsh community development.

Iwan is known for his performance in Misfits, the global phenomenon Game of Thrones and has most recently been seen starring in Sky Atlantic’s new thriller Riviera. He is also set to take the lead in Marvel’s ABC drama Inhumans. In 2015, Iwan released his first album, Dinard, following a series of well-received EPs – Tongue Tied, Changing Times, and Bang! Bang!

“Green Man is Wales’ largest music festival and there’s nothing like it in the world. Unusually it uses its success to help people; from developing community and sports projects, showcasing artists, training disadvantaged people, engaging with science to supporting small Welsh businesses. The ethos of creating opportunities runs right through the heart of Green Man.”

“I am honoured to be the Ambassador of the Green Man Trust, I couldn’t be more excited to support their great projects, and knowing Fiona and the rest of the Green Man team I know there will be a lot of fun as well as hard work involved.”

Fiona Stewart, Founder of the Green Man Trust:
“Iwan is a lovely person who cares deeply for Wales, and his extensive talent and experience as an actor and musician makes him an ideal person to take on this role. I was delighted when he agreed to be the Ambassador of the Green Man Trust, his ideas and support will be invaluable.” 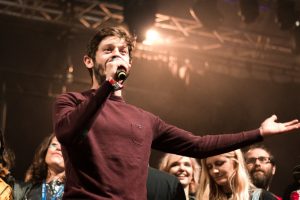 Get involved and support the trust  DONATE